A campaign led by community advocates to provide 24/7 alternatives to shelter for all unsheltered people in Waterloo Region.

Unsheltered Testimonies — hear from the unsheltered themselves, as we work to decriminalize homelessness, ensure access to washrooms and warming locations, support temporary settlements during the pandemic, and make sure that women in the region have access to barrier free overflow shelter spaces.
If you want to join in & get in touch unshelteredcampaign@gmail.com.

If you want to send us a monetary donation through direct bank autodeposit, please mark Unsheltered Fund and email sdcwr@waterlooregion.org.

Needing cash donations or food drop off for meal preparation.
For other donations that may be needed, please email
unshelteredcampaign@gmail.com.

Recent actions by the Region of Waterloo and community partners: 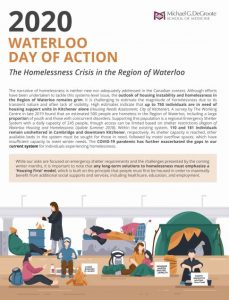 Unsheltered Campaign supported Days of Action 2021, annual advocacy initiative of the McMaster’s School of Medicine. You can read more in the two-pager outlining the final asks to all municipal councils in the region, as well as the full background paper. The student group met with 13 councillors to discuss these asks and to raise awareness of the needs of the housing-insecure populations. Currently, Region of Waterloo staff and regional partners are holding consultations to transform the system responses to homelessness and we will make a case that lived experience voices have the most intimate and intricate knowledge of current obstacles and future solutions and need to be integrated into the planning process. 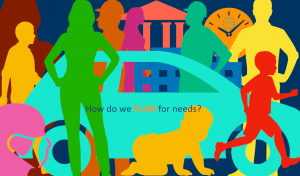 The first virtual forum on Affordable Housing and Homelessness, titled Everyone deserves a place to call home, was hosted by Wellbeing Waterloo Region and partners, including the Social Development Centre. Unsheltered Campaign has grown out of the pandemic community response to fill the gaps in needs of the homeless who remain outside of the shelter system. The forum recording is available now, but for now, take a look at the slides presented by the community advocate Heather Majaury and listen to the Unsheltered Testimonies played at the opening of the conversation. To get in touch with the Unsheltered Campaign team email unshelteredcampaign@gmail.com or visit Civic Hub Waterloo Region website. More Unsheltered Testimonies can be found at this page.

Thank you all who sent your letters to municipal councils. We can do better to support all the unsheltered this summer and the coming winter!

You can donate to the Civic Hub or Unsheltered Campaign funds at our CanadaHelps portal.